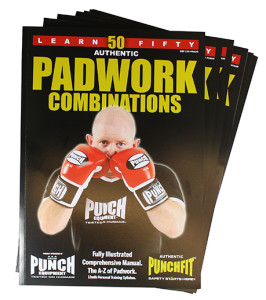 From the guard position there are several basic maneuvers a boxer can use to evade or block punches, all of these can be incorporated into pad workouts to add variety of movement, improve balance, coordination and reflexes, and of course build real world skills.

Parrying or blocking uses the boxer’s shoulder, hands or arms as defensive tools to protect against incoming attacks. A block generally receives a punch while a parry tends to deflect it. A block which intentionally takes the incoming punch on that portion of the defender’s glove is known as a “palm” or “cuff”.

In performing a duck, the boxer drops down with the back straight so that a punch aimed at the head glances or misses entirely. Once the punch has been evaded, the defensive boxer resumes an upright position, emerging on either the outside or inside of the opponent’s extended arm – once in this position the defensive boxer can reciprocate with counter punches.

Slipping is a technique that allows the boxer to avoid a punch while moving in closer to the opponent. It is underpinned by a counter punch that shears down along side an offensive punch, while the defensive boxer deliberately steps forward and rotates their head and body slightly – so the incoming punch passes harmlessly next to the head. This is often combined with a small parry to push the offensive punch further away and is a very useful technique to get closer to a boxer with longer reach.

The leanback is used to avoid a punch by moving the rear foot back and leaning away from the strike. The front foot does not move, and the technique can be combined with a parry to throw the opponent off balance and setup a counterstrike.

Covering up is generally the last opportunity to avoid an incoming strike to an unprotected face or body part. In basic covering technique, the hands are held high to protect the head and chin, while the forearms are tucked against the ribs to guard body shots. In this position, rather than simply absorbing the blows, the boxer rotates the hips so that incoming punches “roll” off the guard.