HOW TO BE AN EFFECTIVE PADHOLDER

Boxing pad sessions provide a workout unlike any other. Padholding is an essential skill for fitness professionals in all areas who want to provide more value to their clients. But padholding, like boxing, is a skill in itself. It has many layers to it and can take years to master.

Here, we’re going to share with you the top 3 tips you need to know to be an effective padholder.

An essential skill for controlling the pace of a padholding session is cueing. Cueing simply refers to the non-verbal communication between you and the boxer and is what allows you to signal what punch to throw, when to throw it and, most importantly, when not to throw.

The first and most important cue for a padholder to learn is placing the pads face-first against your midsection. Padholding comes with inherent risks to the holder who must be able to safely catch punches while remaining in the line of fire. During a session, it is very important for the boxer to know when to throw and when not to. Any confusion and the padholder may not be prepared and could up getting hurt. By holding the pads against your midsection, you are clearly indicating to the boxer not to throw.

Cueing can also be used to indicate to the boxer which punch to throw without even having to say it. Each punch requires a unique position from the padholder. For example, facing the lead pad directly forward indicates a jab, while facing that same lead pad to the side indicates a lead hook. By using these non-verbal cues, a padholder can string together combinations without having to say a word.

The use of cues is a telltale sign of an experienced padholder and allows them to safely and efficiently control the pace of a padholding session. 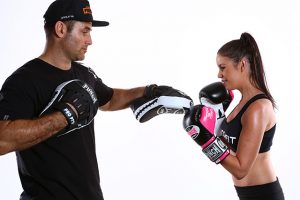 A telltale sign of an inexperienced padholder is giving minimal feedback when catching punches. However, the opposite of this is equally true. There is a fine balance between giving too little and too much feedback. This is a skill which takes time to develop.

As a boxer develops, they begin to learn their range and how to position themselves to hit a target at a given distance. When you reach out or hit back with force to catch a punch, you interfere with the boxer’s ability to do this and will end up reinforcing poor technique. Hitting back at the punch also increases the risk of injury to the boxer, placing unnecessary strain on their wrists and shoulders and likely causing them to land at awkward angles.

So, aim to lightly ‘tap’ as you catch each punch. Even when holding for a power puncher, a light tap, when timed correctly, is all that’s required to provide the perfect amount of resistance. Not only will this help your client develop skill and minimise their risk of injury but it will also give them satisfying feedback with each punch that will boost their confidence and have them enjoying the session all the more! 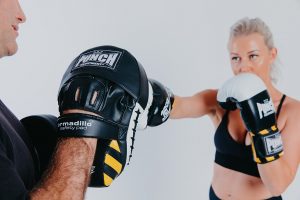 One of the biggest benefits of using pads over a punching bag is that it creates a far more realistic scenario for the boxer. While a punching bag creates a large, almost unmissable target area, the pads require the boxer to develop their accuracy and hit a far smaller, and moving, target. It is the responsibility of the padholder to simulate, as much as possible, a realistic target for the boxer, such as a head.

Nothing is more frustrating for a boxer as a padholder who holds the pads too far apart, requiring the boxer to punch ‘across’ and at two separate targets.  Unless you’re training your client to box two opponents at once, this is only going to reinforce poor technique.

As a padholder, visualise the target you are trying to create and aim to keep the pads no more than a few inches apart. 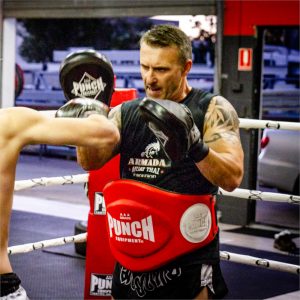 Looking to learn or improve your padholding for boxing?  Visit punchfit.com.au